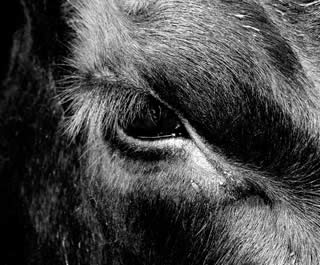 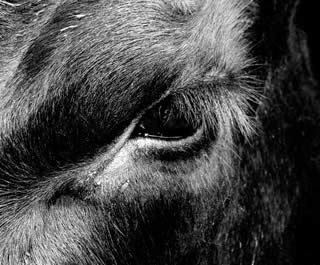 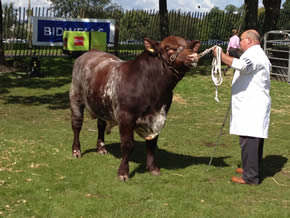 In November 2011 George took two of our bull calves to the Forfar's 'star's of the future' pedigree calf show. Quoiggs Extra Special was placed 1st in his class of bulls born on or between 26th March and the 6th June 2011. We kept him home through the year and entered him at the Perth show in August this year, where he was placed 1st in his class and went on that day to win Shorthorn male champion and reserve overall Shorthorn. This was, as a friend of ours put it 'an extra special day' for Blackford Farms. Well done George!

Another bull calf of ours did very well in 2011. This is our Quoiggs Electric Roan, this was the second bull we had with us at Forfar. We thought after six time’s out and six wins this was the one who would be the 'star of the future' but as you have read our extra special took it from under his nose, but were still very proud of him coming 2nd. He went on to get a 1st in the Ayr show, and a week later another 1st at the Fife show. In June we took him to the Stirling Show and he came 3rd against two of our other home bred bulls, Quoiggs Eye of the Tiger was placed 1st and Quoiggs Frontier squeezing past him for 2nd. Later that day he and Eye of the tiger won best pair of Shorthorns. He is a great young bull with an amazing temperament and lots of potential.

George has shown two of our heifer calves this year Quoiggs Irania and Quoiggs Rhona. Rhona was placed 1st in her class of heifers born after 1st of January 2011 at the Fife Show, and also received Shorthorn Female Champion, reserve overall Shorthorn Champion and as if that wasn’t enough Best Shorthorn Bred by Exhibitor. This was a fantastic day for our heifer. In June Rhona went to the Royal Highland Show where she came 4th in a class of females born after 1st April 2011, coming up against some of the best females across the country this was a fantastic achievement. She went on to the Perth show and got a 1st in her class and reserve Shorthorn female Champion. So she’s one to look out for in the future.

Two of our other bull calves have been out on the show circuit and have promising futures. One being Quoiggs Frontier who I mentioned earlier, has been doing well and Quoiggs Eye of the tiger who got a 1st at Stirling and came 3rd at the Royal Highland Show with Frontier slipping in behind him in 4th place, the pair were up against some very stiff competition so well done again George.

Whilst George has been busy with the cattle and the shows, John his son has been doing very well on the show circuit too. Not only helping his father showing the cattle but also in the young handlers events. Doing well in 2011, coming 1st at Stirling,Kirriemuir and in Perth. This year has been no exception, 1st again in Stirling and also at Ayr. But the highlight of 2012 has to be The Royal Highland Show where John came 2nd in his class and reserve overall! This is a great achievement at 13. We are all very proud of him at Blackford Farms...Well done John!!